Dua to see Dead Ones

Which Dua can I read to see my deceased family members?

Is it best to read uncounted Zikr and Awrad or should I limit the Zikr and remembrance of Allah to a specified number?

If I read surah Baaqara 13 times am I forgiven?

Can Allah forgive me If I read surah Baaqara 13 times in my whole life?

Find below links to recitation of the Glorious Quran

It gives us a great pleasure to announce the start of a new Islamic Studies class for younger children. 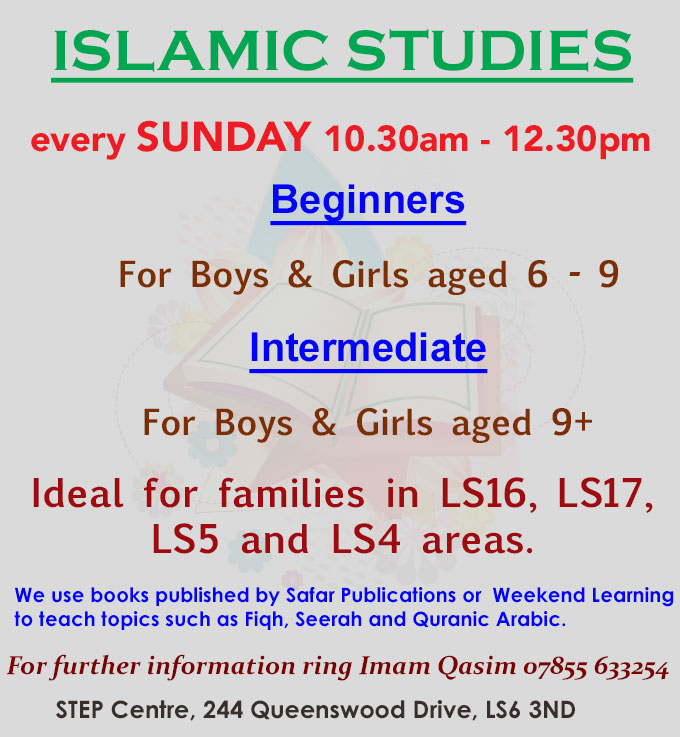 We started our first Islamic Studies class for West Park and Kirkstall area families’ about 2 years ago. Since then we have covered Level 2 to Level 5 of Safar Publications with the same class group. But now more families have been asking for beginners class for younger children. So finally we have organised a new beginner’s class for 6 – 9 age group.

We also have few places in the higher class. Currently, we are learning about Prophet Muhammad and soon will start Level 6 book.

May Allah keep all of us under His protection. Aameen.

Get your pack of Eid Milad cards now

Please pay at least £7 for 6 cards and postage (higher donations are always welcome). Your contribution will vastly enable Peace Matters to continue its charitable work in UK and around the globe.

The month of Rabi-ul-Awal is the month of the birth of Prophet Muhammad. This is the month in which our love for our prophet intensifies and we want to show our love for our prophet to our children, family members, our community and the whole world. There are many ways to display our love for him including holding mahafil at home or in a masjid or having jaloos (a procession). Another way of displaying that love is through sharing Eid Milad cards with our loved ones; specially encouraging our children to share these cards with their friends.

You would have noticed that during Christmas time, our Muslim children receive Christmas cards from their friends. Children love this sharing experience. They love to share things. As Muslim parents and teachers we want to encourage our children to be confident with their faith; to share their faith and culture with others.

In particular, we want our children to have unwavering love of Prophet Muhammad and to develop that love we need to encourage our children to learn more about him and to practice his Sunnah.

Therefore, this Rabi-ul-Awal, we have designed and printed 3 elegant and beautiful cards that our children can give to others to show their happiness and delight that the month of the blessed birth of prophet Muhammad has arrived.

We understand that at first children may be reluctant to write these cards to their friends because they have never done it before. And thats exactly the point. Because our children don’t celebrate their religious days with others, they will be reluctant to share Eid Milad cards with others. But with a little of help and support, they will definitely enjoy the experience.

These cards contain important messages inside, increasing the knowledge of the person sharing and receiving the card.

O Prophet Muhammad! We have sent you as a mercy to the whole universe. Quran 21.107

Say to people! If you love Allah then follow me [Prophet Muhammad] . In return, Allah will love you and forgive you. Quran 3.31

“None of you will have true faith till he loves me [Prophet Muhammad] more than his father, his children and all mankind.”
(Bukhari) 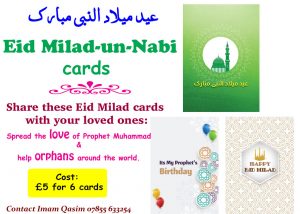 So please do get these cards from us and ask your children to share them with their family and friends.

We do ask you to pay a small contribution to receive these cards. This will ensure that we have covered the cost of producing these cards and any remaining money can be used to support orphans around the world, which is an initiative of Peace Matters.

We cover the following topics during the Quran classes: Qaida, completion of Quran, Surah memorisation, Kalimahs and Prayer book.

The venue is based near Spen Lane and Queenswood Drive. 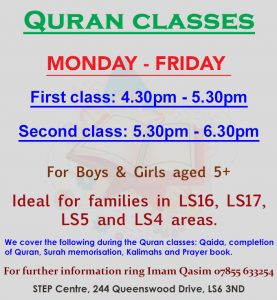 There was a time when having unpleasant mouth odour during fasting was considered a source of pride and a humbling experience. The one fasting knew that his foul smelling breath was more pleasing to his Lord than the best smelling perfume of this world.

The times have changed. Now people consider missing their fast in order not to offend their clients or colleagues with their mouth smells.

Such permission is not a blanket permissibility for everyone to start using toothpastes or mouthwash during the fasting period.

May Allah make it easier for us. Aameen.

Our treatment of our scholars – a case of Shaykh Hamza Yusuf

Muslims believe in one God, one last prophet – Muhammad, and in one last book – Quran. But after these niceties starts our real belief system.  We have

If a person has so many affiliations how can that person truly worship one God and practice the teachings of his Prophet and Quran. Surely our understanding of Islam will be influenced by our other affiliations. Our worship of Allah will be influenced by our associations and connections. It is extremely difficult for a person to put aside his own inner self and truly submit to the teachings and commandments of Allah almighty.

I am deeply troubled with the recent incident with Shaykh Hamza Yusuf.  What he has said during RIS 2017 interview with Mehdi Hasan is for him to clarify and ultimately to be answerable to Allah. But what has troubled me is that how Muslims have started using this incident to disrespect and to go as far as to ridicule a Muslim scholar.

It seemed as if the some Muslims were over joyous just to know that he had made these remarks and it became uncontrollable for these Muslims to start spreading and disseminating his comments online. It was a one time opportunity for these Muslims to show their frustration and their dislike of this highly esteemed scholar. How could these Muslims let go of this opportunity not to show their inner jealousy for Shaykh Hamza Yusuf. All of his years' of learning and service to Islam and to the Muslim community was left aside due to the political, national or race affiliations of those people who were throwing insult at Shaykh Hamza Yusuf.

One of the methods used to ridicule Shaykh Hamza Yusuf is to give him the title of Sufi. In their articles and social media posts Shaykh  Hamza Yusuf is increasingly being referred to as 'Sufi Hamza Yusuf'. Due to their religious and sect affiliations they regard 'Sufi' and what this word stands for in a lower state. By replacing 'Shaykh' with 'Sufi', this is their way of showing their disgust towards Sheikh Hamza Yusuf.

It is also a sad state of affairs that a word that had such hight prestige and status in the past is disregarded in the current times. Part of the blame goes to the people who claim to be sufi and yet do not practice authentic sufism. This has given a bad reputation to sufism and ammunition to the opponents of sufism. Therefore, by calling Hamza Yusuf a sufi, he is being associated with a malpractice in Islam with a hope to taint his reputation of being the most respected scholar in the Western land.

But we should deduct positivity out of every negativity and hope that the new title is a compliment to Shaykh Hamza Yusuf's list of achievements. After years of learning and hard work he has finally moved towards a higher station of wilayat. Everybody is becoming a Shaykh nowdays and less and less people are becoming Sufi as it takes less effort to learn knowledge and takes greater efforts to apply that knowledge to our nafs.

Imam Ghazali has quite rightly said in his magnum opus:

"A wise man has said 'Whenever a man reaches the limit in his knowledge, people cast stones at him'

That is, his discourse goes beyond the limit of their comprehension and so they consider what he says a transgression or a blasphemy."

So congratulations to Shaykh Hamza Yusuf on becoming a Sufi and we pray to Allah Almighty that he enables the rest of us to also follow in the footsteps of Sheikh Hamza Yusuf in learning and disseminating knowledge to others.

I have never had a personal sitting with Sidi Hamza Yusuf, therefore I do not know his personal views about what he said in his interview. This article is not in defence of Shaykh Hamza yusuf but in defence of respecting our elders and respected scholars.

This post was written with no particular person in mind therefore if you find it offensive please do not think it was aimed at you.

Special attention to everyone

Prophet's treatment of the children

He did not hit anyone

By hitting, it is meant to hit in anger and not against one hitting un-intentionally and playfully.

He never talked indecently and forgave others

Holy Prophet Muhammad was the most generous person

It is reported from hadrat Umar that once a needy person came to Rasulullah and asked for some help.

The following is another beautiful hadith shareef that shows the genrosity and magnanimus spirit of Holy Prophet Muhammad:

Hadrat Bilal also mentions that Rasulullah did not keep anything for himself. Hadrat Bilal was made responsible for looking after the needs of people if they come to Holy Prophet for assistance. He was even ordered to take out a loan to fulfil the needs.

Once a person from the mushrikeen (polytheists) came to him and said that he could take out as many loans from him as he needed them. So Hadrat Bilal asked him for assistance whenever he needed to help others. The creditor kept giving him with ease.

But then one day the creditor came and started demanding him money back. He threatened Hadrat Bilal to repay his moeny till the end of the month or otherwise he would take Hadrat Bilal as his slave.

There was no other way but to turn to Rasulullah for help. Hadrat Bilal had not taken the loan out for himself but to help others with the permission of Rasulullah and not only the Holy Messenger could help.

After Isha prayer, he came in the presence of Rasulullah Sallallahu 'Alayhi Wasallam and narrated the whole incident to him. He also said that: 'There is no way to pay this debt so quickly, nor do you have anything nor do I have anything I will hide away. When you pay the debt I will come out, otherwise, that mushrik will disgrace me very much'.

Hadrat Bilal paid the full debt that morning, and informed Rasulullah Sallallahu 'Alayhi Wasallam that Allah Ta'aala has freed him from debts. 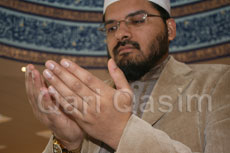